Skip to content
This is a slightly belated post, because I’m an imperfect person and I struggle with deadlines, but last Friday it was the five year anniversary of my relationship with Fahad. Those who know me will know that Fahad is, and has been, my complete best friend for the duration of those five years, and I hope he will be for many more.

His band was playing a beer festival that evening, which I attended with some of our friends, had a bit of a dance to some of the live music and had a really fun time. We weren’t there for long, however, as we headed off to Winchester to have an anniversary meal, as per our yearly tradition.

We settled on Cote Brasserie as our restaurant of choice, partly because we’d heard good things about it and partly because I really needed to pee and didn’t want to walk any further. Cote is a chain that serves fairly expensive French food, which happens to be one of my favourite cuisines, so I had quite high expectations.

We sat in a corner, holding hands and talking about how crazy the past five years have been, as we looked over the menu. One thing that is essential to both of us, on any restaurant menu, is the presence of squid. It’s always a devastating realisation when a menu is lacking the word ‘calamari’, but luckily it was there. We also attempted to order the chicken liver parfait, but unfortunately none was available, so we decided on the mussels in white wine, which our otherwise lovely waiter snootily corrected us as we ordered to ‘moules’. I was torn in my choice for main between steak and duck, but for some reason decided to be adventurous and order the veal escalope without really thinking about it. Fahad ordered chicken in mushroom sauce and a side order of green beans.

The starters were delicious. I’ve never been a fan of mussels before, because they kind of look like the lips of an animal and I’m not 100% keen on that, but they were really delightful. Of course, the calamari was wonderful also, but nothing more than a person would expect. We talked about the past five years, reminiscing about all the weird things we’ve discovered about one another, our favourite moments together, and congratulated ourselves on surviving some difficult obstacles. This all lasted until the mains arrived, when we were too busy tucking into our food to acknowledge one another.

That is, until I realised how entirely underwhelming my main course was. A huge, flat, breaded piece of flavourless veal, surrounded by vague smudges of what is described on the menu as ‘veal jus’. The only thing remotely tasty about it was that it was at least quite well salted. Contrastingly, Fahad’s main of chicken in a creamy mushroom sauce was delicious, and i was quite jealous of him for ordering something so flavourful. Nevertheless, I was hungry, so I ate the roadkill that was on my plate, desperately willing a dessert menu to fall into my hand so I could order something that might redeem the kitchen. 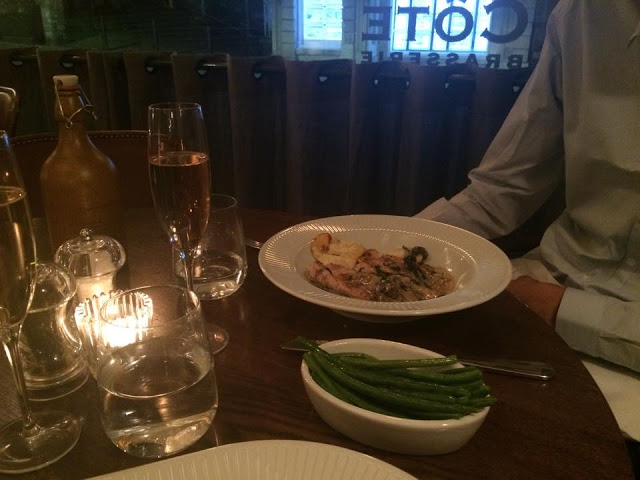 When it did come to dessert, Cote did not disappoint. Fahad ordered creme caramel, which is a dessert that exists beyond my realm of understanding and to me is virtually milky jelly. I, being of more sophisticated taste, went for the apple tart with vanilla ice cream. It was lovely, a perfect balance of flavours. My only criticism of the desserts section of our meal is that the menu was quite limited, and nothing spectacular caught my eye. However, overall, I think it was delicious enough to be a success.

We came home with our tummies full and our hearts full of all the happy memories of the past five years. Here’s to the next five!