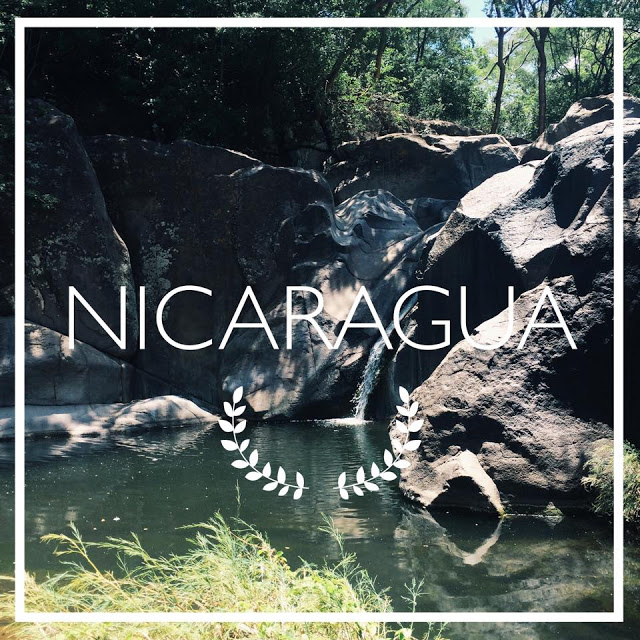 Nicaragua was a huge moment in my life, although it didn’t really feel that way at the time. It was my first ever transatlantic experience, the longest time I’d ever been away from my daily life (dull as it may be) and a chance to visit a place that already felt like home to me, through intimate tales of people I refer to as family. This trip sparked within me not a desire to travel, nor simply be on a holiday, but a yearning for adventures and constant exploration of both myself and my surroundings – be they at home, in my city, or further afield.

Night in León & Cerro Negro
Due to an accident one of the members of our group had on the first night (scary at the time, but thankfully she’s well now), we rearranged our trip, so we could pay her visits in the León hospital during her time there. This meant spending a night at cousin Roger’s hostel, The Monkey Republic, which was an unexpected but charming addition to our adventures, despite the circumstances. The Monkey Republic is an oasis of calm amidst the relentless heat of the busy León streets – a colonial building painted in characteristically cheerful colours, with beautiful gardens that house a surprising amount of wildlife for a city dwelling.

After a busy day walking around León, taking in the various sights, it was wonderful to be able to sink into a hammock with an ice cold beer (Victoria or Toña, take your pick) and relax, with good conversation and a generally amicable atmosphere.

León isn’t a stunningly beautiful city, but it has a certain charm to it as you pass through the grids of houses, shops, hostels and bars. Every corner has something on sale to eat, be it seasonal fruit, cajetas or some other kind of local produce. There is ample opportunity to get some shopping done, whether you’re buying trinkets and souvenirs from the markets or clothes and other goods from the shops along the street. As for dining, you are spoilt for choice – every restaurant we ate in provided huge portions and delicious food, from the classic Nicaraguan dishes served in ViaVia to some of the nicest French food I’ve ever had in my life in Le Turon. If we had stayed for longer, I’m sure we would have discovered even more! 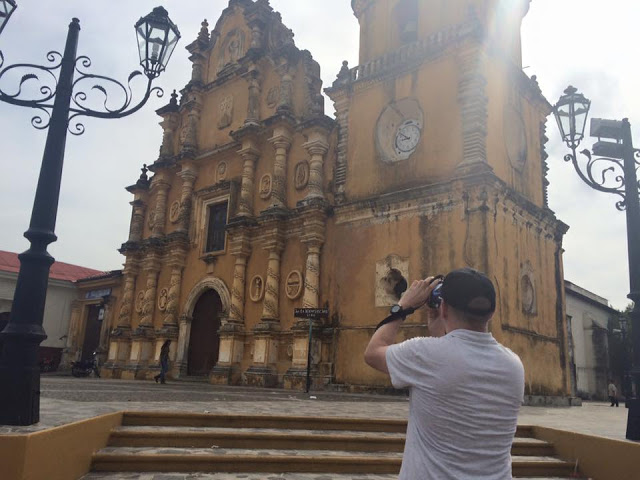 After our night in The Monkey Republic, we ventured just out of the city bundled into the back of a camioneta, or pickup truck, ready for one of our planned activities. León as a city is very hot, and while we were there it was averaging temperatures of 39 degrees celsius, which is extraordinary considering we visited during their winter. This heat is magnified by the densely packed roads, always filled with traffic and people, with very few green areas to clear the air a little. This means that as you leave the confines of the city centre, you find yourself able to breathe a little easier, and I’m so glad we did, because our next plan of action was to climb this:

Cerro Negro, an active volcano that protrudes from the horizon, one of a range of volcanoes in the area, and the newest in Central America. It may look fairly innocuous from the photo, but this was taken from a distance, and although there were tourists/thrillseekers in orange jumpsuits walking in a line along the top of it, the camera doesn’t even register them as specks. Armed with our boards over our shoulders, we took a steep hike up a rocky path before hurling ourselves from the edge, protected only by our clothes and some goggles. I cannot even describe the feeling, but it was incredibly fun to be whizzing down the side of something so powerful, knowing that there were hundreds of years of ash beneath me as I went. I took a piece with me as a souvenir of that moment, and it is proudly displayed on my bookshelf.

Las Peñitas
After saying goodbye to León, we ventured to the beach for 5 days in the coastal fishing village of Las Peñitas, staying in idyllic hostel Barca de Oro. There are not enough complimentary things I can say about this place, from its delightful staff, to its stunningly beautiful eco-lodge accommodation  and its exceedingly delicious food, it would be very tempting to come here and never leave.

Adorned with palm trees, rustic ornaments and surf-inspired decor, Barca de Oro is a fantastic place to retreat to. It is a chameleon setting, offering whatever you wish it to – from relaxation and pampering, to excitement, adventure and fun! There are so many options to choose from, although my choices always ended up with me having a mojito in hand for some reason… 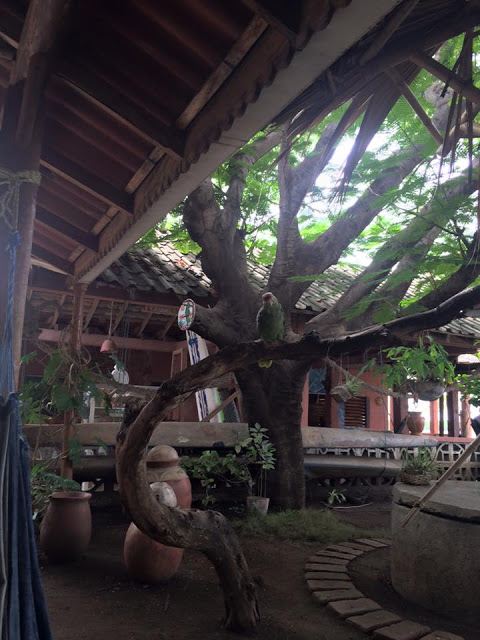 We decided to go on a tour of the nearby mangroves, which was informative as well as charming, as we moved up along the river, looking out for crabs, birds and crocodiles (we saw plenty of the former two, but unfortunately none of the latter).

Every morning was spent in the sea, before the waves got so strong that it brought the local surfers out, which is around the time surfer-watching became our sport. We never got the chance to try it out, but the talent of the local surfers was more than enough to keep us entertained. During the evenings, we mostly dined and hung out in the hostel, but we made an excursion once or twice to local bar El Pirata, where we made a carefully constructed human pyramid and derived great hilarity from flicking coins into the sand, for some reason that I no longer remember.