If there’s anything I pride myself on, other than my rapid mental absorption of odd facts akin to one of the QI elves, it’s my roast potatoes. I’ve tried many a roastie, and I’ve met many a person who stubbornly will not concede that anything but their mum’s roast potatoes are the best. Until they’ve tried mine, that is.

Using duck fat in anything is the kind of indulgence that can only be excused on a Sunday afternoon, once a month or so (more around Christmastime is not just permitted, but expected). The rich, savoury taste of the fat doesn’t just create an additional layer of depth and flavour, it also allows the potatoes to become wonderfully crisp, because of its high smoke point. I will say that duck and goose fat are interchangeable in this recipe, and that if you’re looking to make a veggie alternative, vegetable oil and sunflower oil are a good substitute. However, stay well away from olive oil, as it has a much lower smoke point.

But the potatoes aren’t even the best part about this dish, which is all about rich, melt-in-the-mouth savoury flavours. A simple, well-seasoned pan-seared chicken breast lovingly drizzled with a sauce that can only be termed as deliciously wicked. It is this creamy, lightly-herbed sauce with a strong punch of dijon mustard that transforms this dish from a chicken, potato and veg dinner into something you’d be proud to serve at a dinner party. 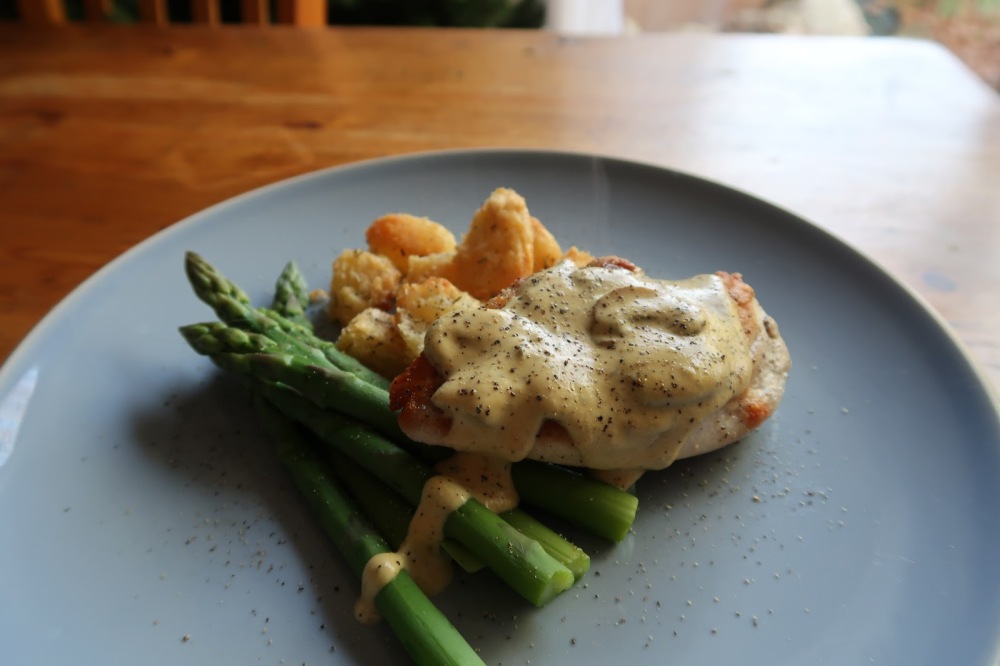 In a pan of boiling, unsalted water, par boil your potatoes for around 8 minutes (depending on how small you cut them), or until partially cooked but still quite firm. While they’re boiling, put your duck fat into a large baking dish and place into an oven preheated to 180°C.
Drain the water using a colander and shake the potatoes around a bit to fluff up their edges. Sprinkle over the semolina and shake again to ensure the potatoes are evenly coated. Moving quickly and carefully, remove the baking dish from the oven and spoon in the potatoes. You should hear a sizzle as they hit the fat – if you don’t, the fat hasn’t heated up enough yet.
Gently and quickly, turn the potatoes so they’re coated evenly in the hot fat. Then, sprinkle over rosemary and salt. I usually sprinkle over crushed chillies too, but didn’t in this recipe. Pop back in the oven and roast for around 45 minutes or until crispy and golden.
When the potatoes are around 15 minutes from being ready, heat a large, non stick frying pan on a medium heat and drop a tiny bit of duck fat or oil into it. Pat dry your chicken breasts, thoroughly seasoning them with salt and pepper on both sides before laying them into the hot pan. Leave them to cook for 7 minutes on one side, tilting them occasionally just to check they’re not burning (if they are, turn down the heat and cover with a lid). Turn them over, add a touch more fat or oil and scatter your sliced mushrooms around the chicken. Cook for a further 5 minutes, or until chicken is cooked through. Remove the chicken from the pan and set aside.
Deglaze the pan by pouring in the wine, allowing it to bubble up and reduce. Whisk in the mustard, cream and herbs and cook until reduced to a consistency you’re happy with. Taste for seasoning and set aside.
Serve with the crispy roasties and some steamed asparagus.